Cyclones can be used in many processes. FASAM specializes in cyclones for particulate transported by a gas or liquid. The company, through many years research, physical lab testing and field test data gathering, has developed its own proprietary cyclone geometries and design tool CysizingTM. Our engineers will offer the most suitable cyclone type and arrangement depending on your efficiency requirements, space limitations and cost. FASAM provides cyclones with four inlet types of Pipe, Tangential, Wrap-around and Axial with Swirl Vanes for different industries. Cyclones are available in carbon steel, stainless steel or high alloy construction. Refractory and/or ceramic lined units are also available for abrasive/high temperature applications.

Cyclones have a very wide range of applications and below is a list of few for example: 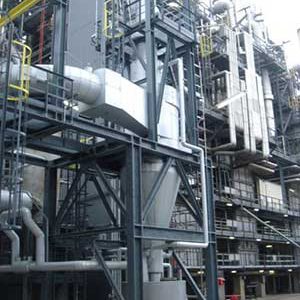 Decoking cyclones are usually used in olefin and ethylene plants to reduce emission of coke particles to atmosphere during decoking cycles of cracking furnaces.  Depending on country environmental regulation, maximum emission limit varies from 50 to 20 mg/Nm3.

In cacking furnaces, the pyrolysis of all the various hydrocarbon feedstock (e.g. ethane, naphta) involves dehydrogenation and condensation so that not only olefins are produced in the radiant coils but also coke which forms a progressively thickening layer in the course of time on the internal surface of the coil and the primary TLE’s. The accumulation of deposits on the surface of the radiant coil and the TLE’s necessitates periodic cleaning to prevent overheating of the radiant coils and the TLE’s and to restore the original yield pattern. The coke layer on the inside tube surface of the radiant coils is removed by controlled burning of the coke deposits using a steam/air mixture, a procedure known as steam/air decoking. In time of decoking, the mixture of air/steam and coke is pushed toward decoking cyclone, where the clean air/steam is vented to atmosphere and the separated coke particles are fallen from cyclone bottom to a container for disposal. 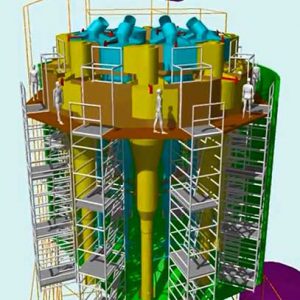 Fluid Catalytic Cracking Units (FCC Cyclones) are the principal technologies that enable the critical process within heavy oil refining of converting the heavy oils into more valuable gasoline and lighter products. More than half of the refinery’s heavy petroleum is processed through the FCC Cyclones, and the FCC Cyclones are also an important source of butene and pentene olefins used in refinery processes. Our FCC Cyclones are designed to enhance separation efficiency, accommodate increased catalyst loading, and are tailored to meet the application needs of refineries and petrochemical plants.

We custom-engineer the following products at the highest quality: